Google replaced the right hand adverts with a new four-pack of ads at the top of the SERP, and up to another four at the bottom – well below the fold.  In effect, this makes desktop SERPs look much more like their mobile cousins. 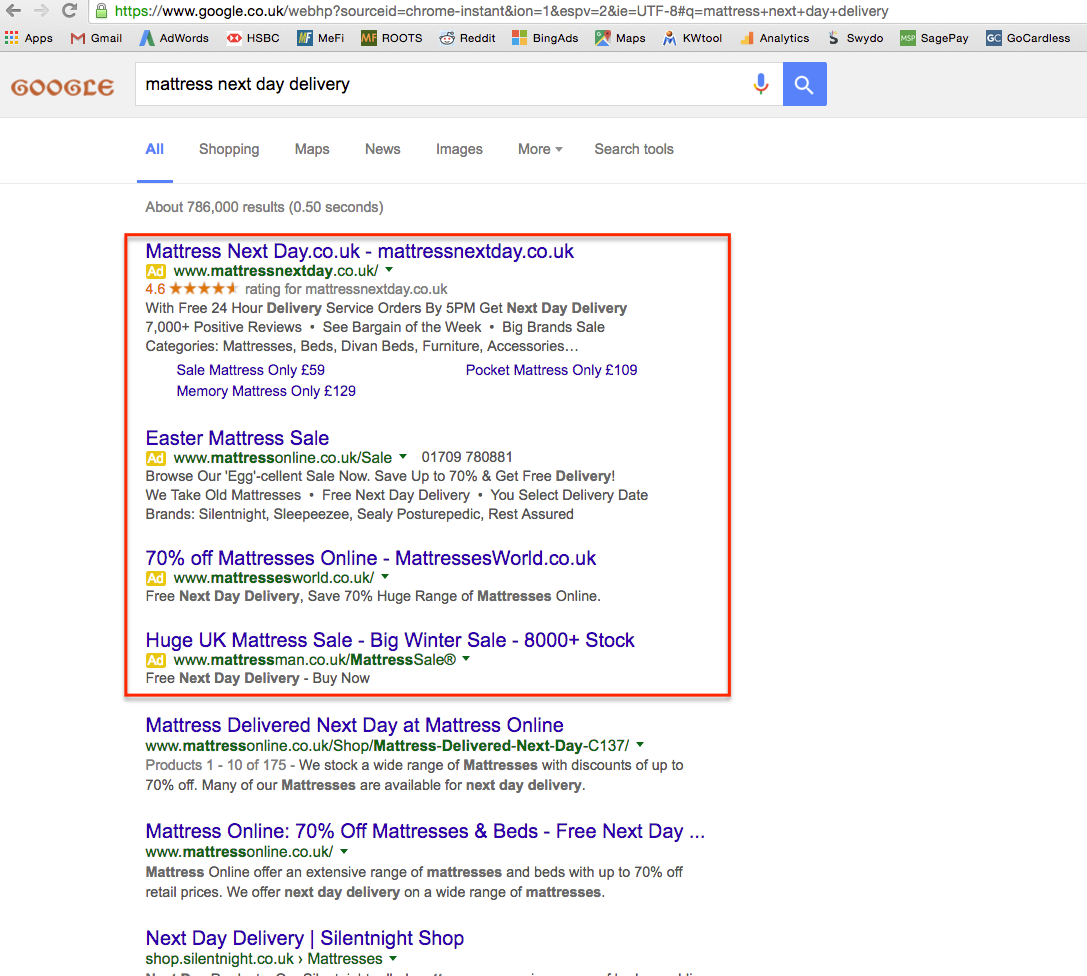 As you can imagine, there were rather a lot of worried phone calls between clients, agencies, and Google when the news came out. The concern amongst agencies and SME sized advertisers was that this would drive click costs up (good for Google!), create a bidding war for the top-of-page four pack where presumably all of the traffic would be (good for Google!), and create a barrier to entry for small and medium budget advertisers who would not be able to complete with deep pocketed advertisers for top spots (bad for everyone else).

We looked at a cross section of our SME sized client’s in both ecommerce, B2B and lead generation to see how March has shaken out in terms of Cost per Click.  The results are: Right Hand Ad Armageddon was a whole lot of nothing.

Two examples out of Analytics:

A B2C service client in a competitive UK nice.

Over the next few weeks, we’ll isolate and share trends that we see as a result of the change to the SERPs so that we can show a proper, long-term effect.

Early indications are that Shopping Ads are the new turf everyone is fighting over. It makes sense – they now dominate the right hand side of the screen, and show more frequently at the top for commercial searches.

Sorry, the comment form is closed at this time.

This website uses cookies to improve your experience while you navigate through the website. Out of these, the cookies that are categorized as necessary are stored on your browser as they are essential for the working of basic functionalities of the website. We also use third-party cookies that help us analyze and understand how you use this website. These cookies will be stored in your browser only with your consent. You also have the option to opt-out of these cookies. But opting out of some of these cookies may affect your browsing experience.
Necessary Always Enabled

Any cookies that may not be particularly necessary for the website to function and is used specifically to collect user personal data via analytics, ads, other embedded contents are termed as non-necessary cookies. It is mandatory to procure user consent prior to running these cookies on your website.